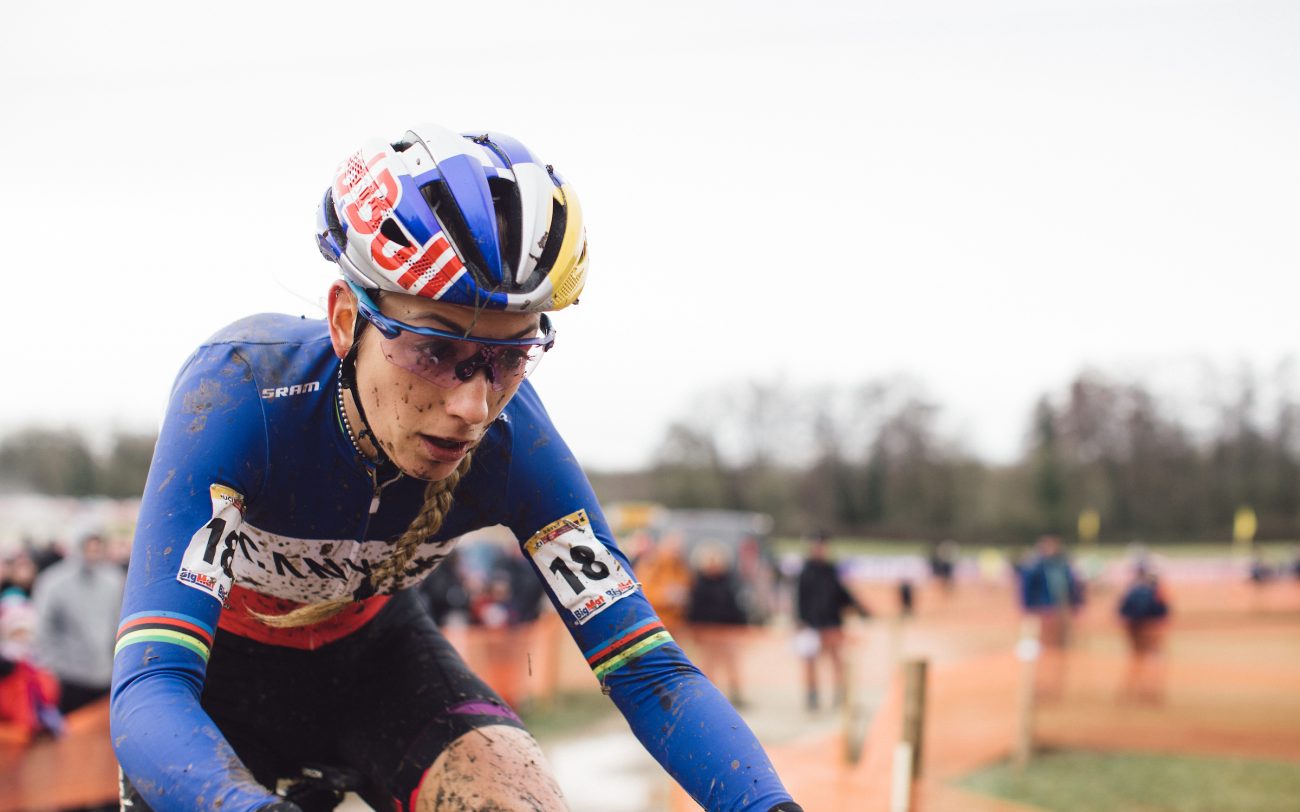 31 January 2018 – Pauline Ferrand-Prévot confirmed this morning she will line up in Saturday’s UCI Cyclo-cross World Championships in Valkenburg, Netherlands despite a heavy fall in last weekend’s World Cup in Hoogerheide. The current French champion was cleared of any major injuries and says she cannot wait to take to the start line in one of her favourites disciplines.

“Even if I had broken my ribs I think that I still would have tried to race on Saturday,” said Ferrand-Prévot with a smile.

She confessed that her motivation for the championships on 3 February has slowly been growing over recent weeks. “I started the cyclo-cross season focusing only up until the national titles mid-January, and with the aim of using cyclo-cross as a base for my goals in the MTB and road seasons.”

“After I won the French championship I knew I was in good shape, I had already sneaked a look at the circuit in Valkenburg and I became motivated for the World Championships.”

Ferrand-Prévot continued “I’m feeling really happy on the bike at the moment. I have a lot of support from my team so I am lucky for this. It’s an advantage to have great equipment and staff. For me it’s been a tremendous cyclo-cross season so it made sense to continue to World Championships.”

The Frenchwoman may have only been using cyclo-cross as a base for the road and MTB but she never finished outside the top-five in any event this winter. At her second international race after a two-year absence she won the Vlaamse Druivencross Overijse, followed by a convincing win at French nationals, and a podium third place in the World Cup in Nommay. All despite starting at or near the back of the grid on most occasions.

Ferrand-Prévot says the Valkenburg course can suit her but pointed towards what she anticipates as an enthralling women’s race.

“It’s a hilly, hard and technical lap. I like it a lot. Our race will be exciting and unpredictable. The World Cup podiums during the season have always been different. There’s not only one rider that can win, there’s probably ten different women that can win. It’s creating a lot of interest and I think fans are going to see a really cool race!”

Despite her impressive results and a course that sits well with the former World Champion Ferrand-Prévot soft-pedaled her expectations this weekend.

“I maintain that it’s good preparation for my road and MTB seasons. At the same time I’ve seen that it’s possible I can step on to the podium at the highest level again. I’m motivated and serious for Saturday. But I also know that all the work that I’m doing now will pay for the classic races in April that are my big goals. I’m happy with the decision to race cyclo-cross this winter, I have the French title, I’ve had some nice World Cup results and as well I’m continuing to World Championships. After the crash last weekend, I’ve come out with no injuries so I’m also pleased that I can start fully fit.”

Ferrand-Prévot said she goes in to the race for the rainbow jersey without any pressure. “I don’t want to speak about results. On Saturday I have nothing to lose. I don’t have the rainbow jersey to defend. Like I said I’ve had a nice season so far. I want to do my best, go full gas, not forget anything important, or make any mistakes. I’m in good shape, I have the best support around me and I want to do the maximum race I can do with all of those things.”