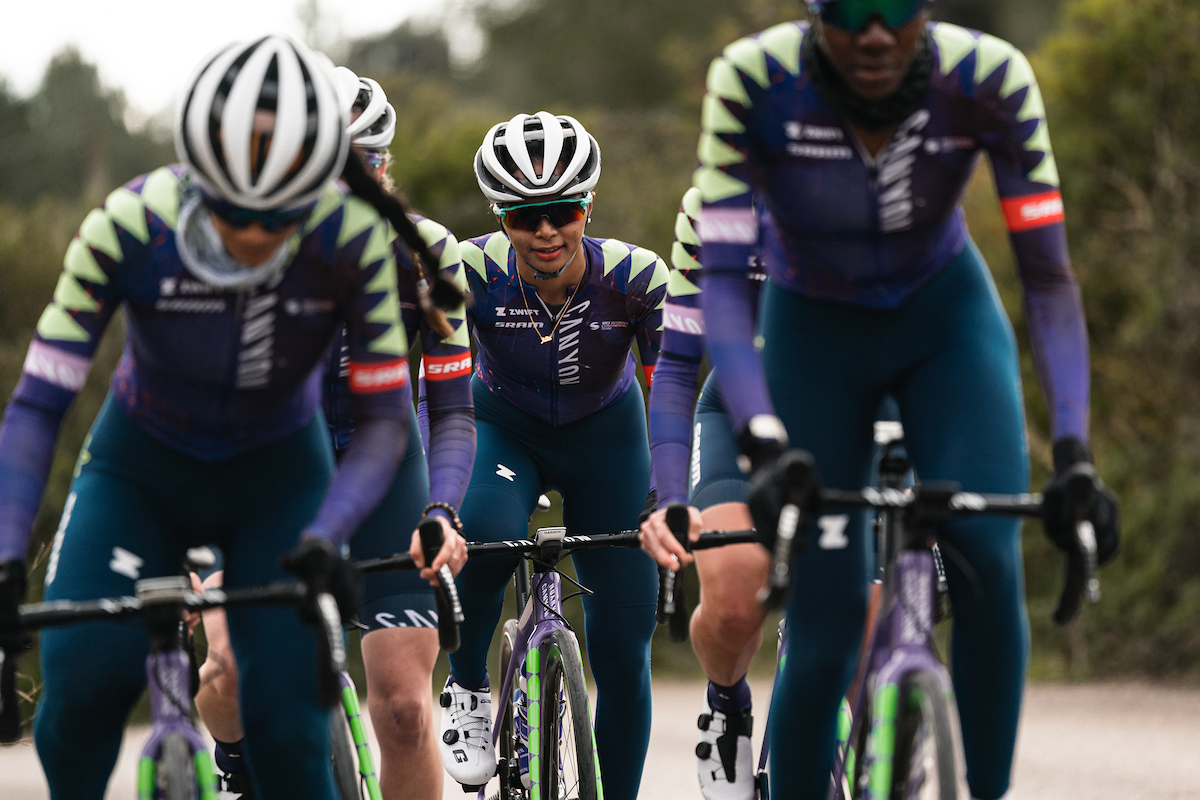 With much anticipation, the eight-rider roster of CANYON//SRAM Generation is announced today. The new UCI Continental team is part of the World Tour Team CANYON//SRAM Racing’s long-term D&I program. This two-tier structure is the first of its kind for a European-based WorldTeam creating a formal pathway to the Women’s World Tour.

CANYON//SRAM Racing made the announcement of its plans for the new team in July and opened rider applications in September. The team received an incredible 239 applications from riders of 62 different nationalities, before selecting the final eight riders.

CANYON//SRAM Racing and CANYON//SRAM Generation’s Diversity and Inclusion expert, Christine Kalkschmid: “We were overwhelmed by the number of applications from so many different nations, from all continents, through a wide variety of ages, and from all different backgrounds.”

Kalkschmid elaborates, “As the development team is part of the CANYON//SRAM Racing’s D&I program, we did not only want to ensure applications from promising riders from a performance point of view, we also wanted to make sure that we create a new team of ambassadors for Diversity and Inclusion. We requested information about performance data and previous successes of the applicants but also about their values and goals and how they think they can contribute to the team’s success.”

“We are very proud to have brought this team to life. With our structure and guidance from experts, we will see this team compete at UCI races and on different national race calendars, where they can learn and grow. We are very excited for the season ahead.”

Agua Marina Espinola Salinas – A multiple national champion and the first-ever cyclist to represent Paraguay at an Olympic Games, 25-year old Espinola Salinas joins the team as the more experienced rider. Having lived and raced in Europe at various times over the last five years, Espinola Salinas will be the unofficial road captain of CANYON//SRAM Generation.

“This is a big hope for me. Since I started cycling, I sadly discovered how challenging it is to come from lesser-known countries and find a place in professional cycling. The fact that such an important team such as CANYON//SRAM Racing believes in this project and has provided this opportunity is amazing and a sign that things can change for the better. I’m really happy to be part of this change and to have this opportunity.”

Fatima Deborah Conteh – Winner of the biggest race in Sierra Leone, Tour De Lunsar, in 2018 and on the podium again in 2021, and stepping on the podium at national road championships, Conteh has consistently shown her talent as one of the best riders in her country. Now at 22 years of age, Conteh says she can’t wait to start her season with the team and especially wants to show her sprinting strength.

Valentine Nzayisenga – Nzayisenga became Rwanda’s national road champion in 2019 at just 19 years of age and achieved that after racing her bike for only one year. She competed at both the African Continental Championships with a top ten in the road race and the UCI Road World Championships last year and says hard work and determination have been key to her achievements in cycling so far.

Siti Nur Alia Mansor – At 20 years of age, Alia Mansor said she started to consider a cycling career more seriously in 2016 when she raced Sukma Sarawak, one of the biggest cycling events in her home country of Malaysia. With experience predominantly racing track cycling, including several national titles to her palmares, Alia Mansor said she is excited to start her career as a road cyclist.

Llori Sharpe – In 2020, Sharpe decided to focus solely on cycling after several years of competing in swimming and triathlon. With a long list of achievements in her home country of Jamaica, Sharpe has also shown her talent competing in several Central American and Caribbean championship swimming and triathlon events. A bronze medal at the Caribbean Cycling Championships time trial and a fifth place in the road race last year affirmed her decision to concentrate on cycling where she believes her best strengths are as a climber.

Ricarda Bauernfeind – Considering herself as a climber, 21-year-old Bauernfeind also showed she has a burst of speed after she took home a bronze medal from a bunch sprint at the German national road championships in 2021. Competing on the track at a junior level, Bauernfeind has coached herself for the last three years while focusing on her university studies.

Olivia Shililifa – The current Namibian road champion in the U23 category, Shililifa started racing in 2019. Already experienced racing MTB at an international level, 19-year-old Shililifa says she quickly fell in love with cycling and competition and that tactics and strategy are one of her favourite aspects of road racing.

CANYON//SRAM Generation is supported by the same partners as CANYON//SRAM Racing. In particular, the additional financial commitment and support from co-title partners Canyon and SRAM have allowed this new team to come to life.

Roman Arnold, Founder of Canyon Bicycles: “Making it as a professional cyclist is never easy, and it’s almost impossible for riders who don’t have access to the support networks they need. Through the CANYON//SRAM Generation team, we look to help change that by identifying and nourishing new female racing talent to achieve its full potential from across the globe. I cannot wait to see what they achieve.”

“The CANYON//SRAM Generation team will give talented female riders from underrepresented countries around the world a unique pathway to race in Europe. Here, they will learn from the best and have access to one of the top female programs, with the goal of riding in the UCI Women’s World Tour. SRAM is proud to extend its partnership with CANYON//SRAM on this Generation team. We believe that Generation riders will become role models for their peers and grow women’s cycling globally. We are looking forward to supporting the team and cheering them on to every success on and off the bike.”