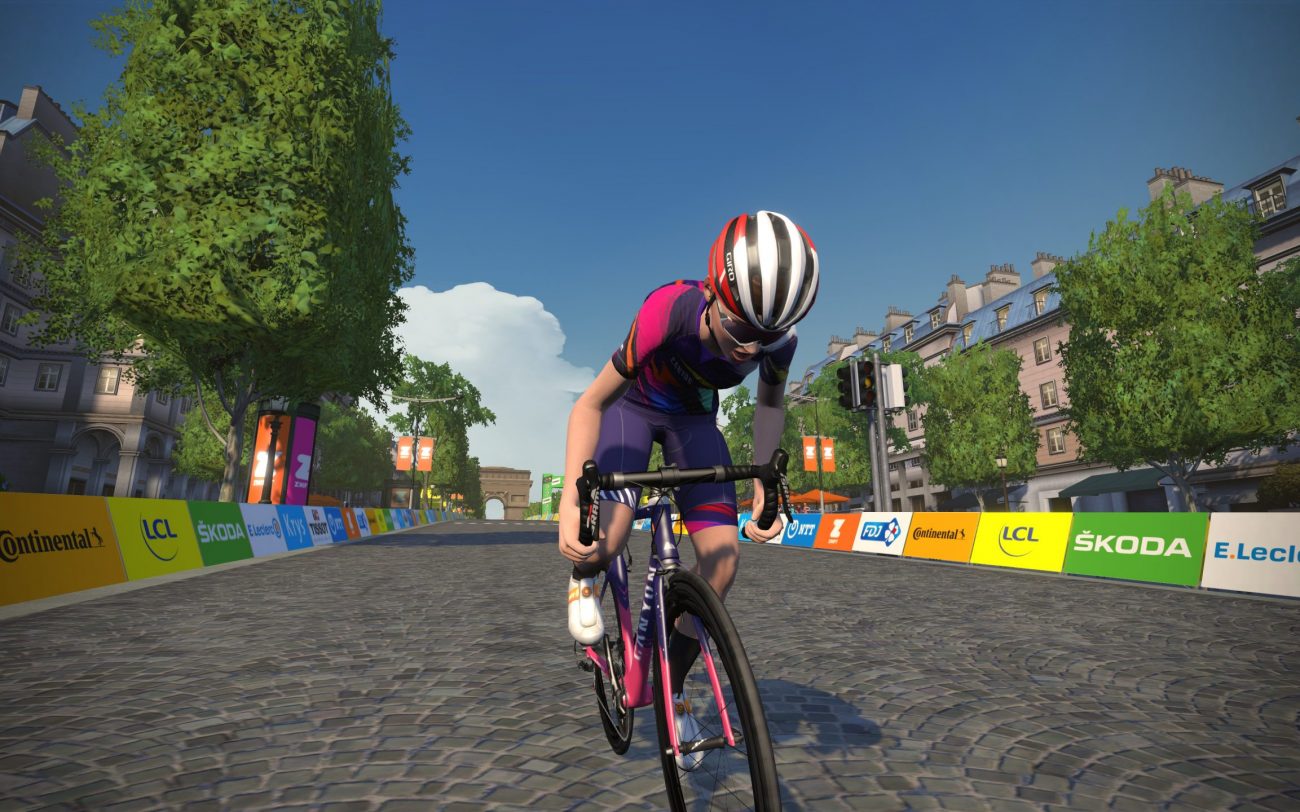 We maintained our lead in the youth classification after the second stage of the Virtual Tour de France today, held on the online training and racing platform, Zwift. The first of two mountain stages for the six-stage race, it was a battle from the beginning and still came down to an exciting, attacking finale. The stage was won by Lauren Stephens (TIB) with Ella Harris finishing eighth.

Ella, took to the start line at 1am from her home in Dunedin, New Zealand. “As a team, the main aim was to go for the GC and have as many riders as close to the front of the race as possible. We had a rocky start however, with Omer having some issues not even 30 seconds into the race. Midway up the Epic KOM, the bunch was reasonably large with the pace being fairly steady, but unfortunately then we lost Hannah with an issue which left just me at the front.”

Ella continued, “I was feeling okay over the QOM but not fantastic. I battled up to the radio tower and limited my losses to two riders off the front, but it was then my turn to have a ‘virtual mechanical’ while in a super tuck on the descent. I ended up completing a solo time trial for the remaining 8km after the descent with the field obliterated behind. I’m really disappointed with my result because I know I could have been in the front bunch, but unfortunately things were out of my control and I just had to make the best of a bad situation. I like to think that the bad luck is out of the way now for our team, so I’m looking forward to the next stage where I aim to make up for tonight.”

Ella’s teammates each give their summary of the stage.

Hannah Barnes: “The team did great yesterday so I was nervous to keep up their good work. We wanted to conserve as much energy as possible on the shallower parts of the climb so we could make the main selection over the top and go for points in the final. I was really happy with how it started. I was able to stay with the first group for the first 20 minutes with Ella and was feeling good but I lost contact after an issue and lost ground.  I was really disappointed and tried to make up as much ground as I could but struggled after that.”

Alena Amialiusik: “The stage was hard. I’m really wanting to improve my racing on Zwift but even if I’m feeling strong out on the road, I can’t yet transfer this across to the virtual world. I’m aiming to improve and to show that I can also be a strong Zwift rider, and I hope one day it will happen. Today’s stage was disappointing for me. My teammates are amazing though. The group who rode yesterday did a great job and gave us a target. Today we couldn’t make the best of that situation, but there are still two weekends to fight and to regain our position in some of the classifications.”

Omer Shapira: “Today wasn’t my day. I was off the bike within the first minute of the race, losing some valuable seconds, and then from there it was an individual time trial to the finish line. I tried my best and scraped into the top 25 at the finish so I could earn a few points for our team. It was far from the best race.”