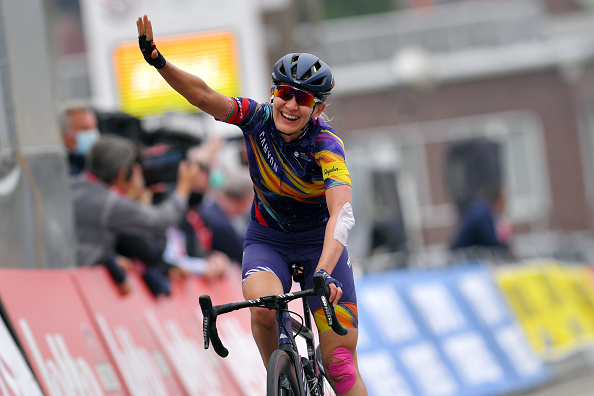 At the start of the year, Alena Amialiusik considered the 2021 season could be her last. A likely Tokyo Olympic selection was on the horizon to put the finishing touches on a long and successful career. However, plans change. After a second consecutive season free of major injuries, Alena enjoyed a stage win at Lotto Ladies Tour, represented her country at her third Olympic Games, and took a top ten in the ITT at the UCI Road World Championships in Flanders, Belgium. And she is determined to continue.

We are excited to announce that Alena has extended her contract to stay with the team through to the end of 2022.

“At the start of the year I thought maybe it will be the time to stop, but during the season I understood I am not ready yet,” explains Alena.

“I’ve had two seasons now without heavy crashes or serious injuries. Being able to regularly train, race, and rest without rushing to come back from broken bones or always feeling like you’re running behind in fitness has been an advantage for me. It’s also given me a fresh and happy head. A sense of calm where I could fully focus on my preparation and racing.”

“I am not ready to leave the ‘place’ I’m in now. I’m racing strongly, I’m happy, and my job gives me a lot of satisfaction. Sport has been a part of my life since I was 7 years old. I’ve thought long and hard about stopping but it’s not the time for me now. It makes me even happier to say I’ve signed again for CANYON//SRAM Racing!”

Alena will move into her seventh season with the Women’s World Tour team and alongside Tiffany Cromwell, the pair are the only remaining two riders since the team’s 2016 debut.

“I’m one of the originals,” jokes Alena. “Those who know me, understand that I’m the kind of person that loves stability. I have found a good team that supports me as a person and as an athlete 100%. I don’t believe there is a better team for me so I have no wish to look around for something else.”

Alena continues, “I was happy with my 2021 season. Finally, I can say I am back to my level where I can compete with the strongest and this gives me even more power and confidence. The win in Belgium was a fresh breeze and makes me hungry for more success.”

Alena says she is proud to be part of a team that is creating another first for women’s cycling with the World Tour team’s expansion to include a Continental Team in 2022, creating a pathway for talents from countries underrepresented in the women’s pro peloton.

“I am so excited and happy with our team’s expansion. It’s a big step for us, but a very important step for women’s cycling. I am proud to be a little part of what is going to be a big team next year. It’s a project to help the future of many talented riders but also many young riders who are dreaming of being a pro cyclist to see that there is a pathway for them too.”

Alena is currently in her off-season break at home in Belarus and will return to training at the end of November. Her targets in 2022 start at the first spring classics.

“I am really looking for the spring classics. Strade Bianche and the Ardennes especially. But of course, it’s a clear goal to be a part of the team selected for the Tour de France Femmes avec Zwift.”