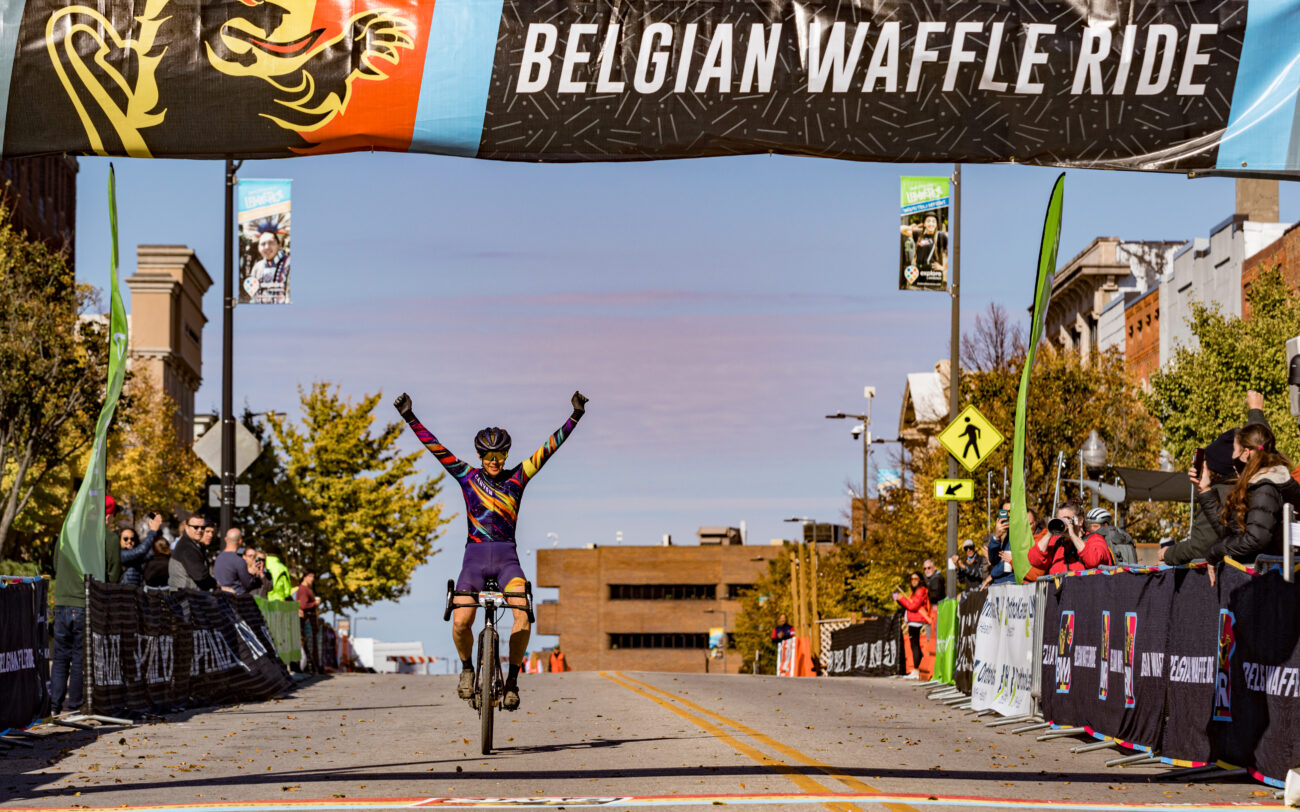 “That was a really nice way to finish the season,” said Tiffany Cromwell after winning yesterday’s season finale at Belgian Waffle Ride in Lawrence, Kansas.

“I’m not going to lie. The result was a bit of a surprise! I was nervous going into the race as my preparation hasn’t been amazing. After Paris-Roubaix Femmes, I could feel I was tired mentally and physically. I’ve kept training but it’s been overall shorter rides with less intensity.”

A preparation it seems, that was of benefit to Tiffany in the end.

“Turns out, the freshness and a long season of racing in the legs definitely helped me get through the 180km race,” explained Tiffany.

Instead of a mass participation start, the women’s field were given their own race start.

“We started ten minutes behind the men’s Waffle start. It gave it a different dynamic and I believe that worked in my favour. The start was hard, but not crazy like when we all start together. Already after 30km or thereabouts we had a group of three of us at the front. With the lack of high intensity in the last weeks, I really had to dig deep and my heart rate was super high for a long time. I was thinking to myself that I couldn’t stay 180km at this effort. Still, I could stick with the other two riders and we worked together. Hannah (Shell) dropped from our group and then I had to let Flavia Oliveira go ahead on a small climb and keep my pace.”

With live updates on the course from the race organisers, Tiffany said she had a good overview of the race situation.

“The race was really good at giving updates on time splits, so I always knew where I was standing. There were strong winds with a lot of head and crosswinds in the first half. After 50km, I was alone and then we started to catch some groups from the men’s Waffle. Whenever I caught a group, I was able to use them to get a little bit of respite from the wind, but then I would continue past to go a slightly higher pace.”

“Around the halfway point I was surprised to see Flavia again. With the way she was riding at the start, I thought I was racing for second place. I could see she was suffering and when I caught her I was able to ride straight past. From then on, I was leading the race.”

Tiffany admitted one of the biggest challenges with the gravel events she has raced this season has been fuelling correctly for the longer length races and yesterday’s race again proved a hurdle.

“I knew I had to keep the power on the pedals, but with a mix of wind and the relentless undulating hills, I was fatiguing. With 40km to go, I really hit the wall. I had tried to focus on my fuelling but the lack of it caught up with me. I went into rescue mode and ate and drank every gel and carbo drink I could get my hands on. My energy came back and I got my second life for the last 20km and was able to power my way to the finish line.”

“Despite the race being far longer than I like, it was a fun course. A lot of gravel, all in good condition, mixed with some fun singletrack. They put in a cyclo-cross sector for something different and if you get to see a video of me doing it you’ll see how tired I really was,” laughed Tiffany.

“The last 6km were a fast and flowing single track and a lot of fun! When I came out of that and saw 1km to go I was happy. I finished the race empty and tired but also satisfied and ready for the off season.”

Tiffany said she has enjoyed the new challenge of racing gravel in 2021. CANYON//SRAM Racing recently announced that the Australian rider has extended her contract with the team through to 2023, and plans to continue to combine both gravel and road races in her program.